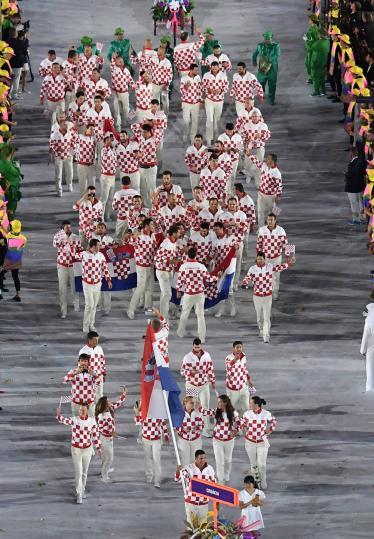 Such a great buzz being able to say that having won 3 Gold and 2 Silver medals by day 13 of 2016 Olympic Games Croatia is Number 18 out of 206 countries competing and yet population wise it would probably be on the tail end of this count. What a fantastic achievement. So proud!

Croatia’s Sandra Perkovic flirted with disaster by fumbling the first two throws before snatching gold in the women’s discus on Tuesday 16 August, successfully defending her 2012 London Games title. Hence, becoming only the second woman to successfully defend her Olympic discus title. In Rio, Perkovic appeared on edge but dug deep to hurl her third effort 69.21 meters and retain her crown, winning by 2.48 meters ahead of rivals who never looked like matching her.

Croatian brothers Martin and Valent Sinkovic secured a gold medal in the men’s double sculls final in the Olympic rowing regatta on Thursday 11 August 2016, in a tough duel that saw them battling Lithuania’s boat neck-and-neck for much of the race.

After taking an early lead and holding Lithuania’s Mindaugas Griskonis and Saulius Ritter to the second-place spot through the 1000-meter mark, Croatia slipped back into second place in the third-quarter. Lithuanian fans in the stands at Rodrigo de Freitas Lagoon cheered wildly as the two boats battled for gold through the final half of the race.

It was Monday 8 August 2016 when Croatia’s Josip Glasnovic captured gold in men’s trap at the Rio Olympics after defeating Italy’s Giovanni Pellielo in a sudden death final match that went to a shoot-off. Glasnovic and Pellielo went back and forth throughout the gold medal match until they both finished with 13 out of 15. In the fourth round of the sudden death shootout, Pellielo missed and Glasnovic followed up with a hit to win his first Olympic medal. Shooting first, Pellielo actually missed on his fourth shot. Glasnovic calmly hit his fourth and triumphantly raised his gun in the air as pink dust from the target blew in the gusting wind.

Though Glasnovic had found modest success in World Shooting Championships and European Shotgun Championships, his best finish was fifth place in the event, and he didn’t compete in the 2012 London Games. He was confident all afternoon though, being the only competitor in the semi-final at Rio to shoot a perfect 15 for 15.

This is the second consecutive gold medal for Croatia in men’s trap, as Giovanni Cernogoraz won in 2012 London games.

Martin, who cruised into the final after winning a qualifier and coming second in the semi-final, was beaten in a photo-finish by defending Olympic champion Mahe Drysdale from New Zealand. Czech Republic’s Ondřej Synek finished in third place.

“It’s still sinking in, this first medal, this was the best day on all five days of racing,” Stipanovic, who finished fourth at the 2012 London Olympics, told reporters. “I managed to pass Tom (Australia’s Tom Burton) on the downwind, and now it’s between just him and me.”

Despite only one first in the opening round, Stipanovic earned his spot at the front of the 10 medal-round finalists out of a 46-boat fleet with eight top-10 finishes in the preliminary races. Race ended with Australia’s Tom Burton finished claiming gold, Stipanovic won silver, and New Zealand’s Sam Meech got bronze.

With a few days of Olympic competitions left Croatia may climb the ladder of glory a notch higher but even if its medal tally stays as is it’s such a joy and pride to pin this feather onto the Croatian success cap. Ina Vukic, Prof. (Zgb); B.A., M.A.Ps. (Syd)