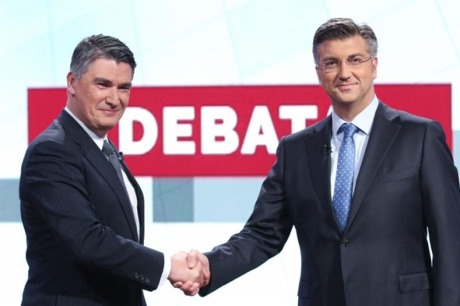 It was going to be the debate of a decade – Croatian media promised, building up high expectations and nail-biting anticipation for the televised debate held Friday 12 August 2016 between the leaders of the Croatian two biggest parties: Andrej Plenkovic/ HDZ/Croatian Democratic Union and Zoran Milanovic/SDP/Social Democratic Party. It was going to be the debate that would shift voters from either camp into the other and end the misery of the two parties seemingly being neck to neck for the upcoming election. It was going to be a hard debate on the issues of economic growth, employment and debts; highlighting the answers. Alas – a debate it was but one conducted between two seemingly personal friends who do not want to step on each other’s toes. No room for that in politics of a country riddled with all sorts of crises – political, economic, and ideological, if you ask me.

Walking away from this debate one could not shake off the nasty feeling that the coming ballot might not end the political deadlock, which usually ends in a minority government. A large number of undecided voters will be the key but if Croatia gets another hung parliament the likely kingmaker would once again be the reformist Most party, or Bridge, which despite numerous new independent smaller coalitions appearing like mushrooms after the rain, now has the support of about 10% of voters. Most/Bridge has proven to be a destructive force rather than the one capable of building and fortifying bridges into stable government.

Croatia needs decisive reforms to fix its fragile public finances, significantly improve the investment climate, spur bold growth and reduce public debt now standing at 86% of GDP. While we know from his last performance as Prime Minister Zoran Milanovic has no chance whatsoever in achieving these priority goals for Croatia, even with the political bubble-and-squeak coalitions he has concocted, it is at the same time difficult to ascertain from his seemingly measured, polite and controlled appearance last Friday whether Andrej Plenkovic of HDZ has got the skills and the oomph to make the outcomes for those goals happen for Croatia.

Milanovic, former prime minister of a government that almost ruined completely the economy, said Croatia needed a stable government and a safe direction for economic development. Milanovic has gathered around his SDP a coalition of all-shades-of-red and many a ranting political lunatics (including himself and the former president Stjepan Mesic who is re-entering politics out of furious revenge against conservative HDZ, who had in recent months cut his cushy benefits as former President) that can only announce to Croatia not stability but a meal of political bubble-and-squeak bound to turn Croatia into a state of fatal indigestion that blocks any progress of anything and in particular democratic ideology. He promised if in power his party would impose no new taxes and would strive to create more jobs for youth and invest more in education that would amount to 2% of the country’s gross domestic product.

Plenkovic refuted Milanovic’s idea of no new taxes, saying it was Milanovic who increased the value-added tax rate (Good and services tax) to 25% when he was the Prime Minister. He added HDZ would reduce the rate to 24% in second year of next government and by the end of the term to 23%. Meanwhile, the party would undertake the reform of the corporate and income taxes, he said.
So, both promised to lower the tax burden for citizens and businesses. But, 2017 is looking like a particularly challenging year financially; Croatia will need almost 30 billion Kuna (US$4.5 billion/4 billion Euro) just for refinancing bonds and interest payments.

Regarding debts, Milanovic said the previous HDZ government has left the government a huge budget deficit. He said it was during his term that Croatia for the first time ever had a positive balance of payments in the amount of 2% of the budget.

Plenkovic argued during Milanovic’s term, public debt has drastically increased, saying HDZ would reduce the debts with economic growth and using state-owned assets.
When questioned on employment, both of them pledged to encourage job creation but gave no specific plans.

Regarding how to deal with a possible new migrant crisis, Plenkovic said he believed there would be no new migrant wave. He said the problem of protecting external borders has been solved at the European Union level.

While Milanovic said his government did quite well last year on the refugee issue, SDP would act same way if there would be a new wave of refugees.

All in all, it appeared to me like in that fable: the mountain was roaring in labour, it thundered but in the end a mouse was born. The debate provided the audience with few barely superficial answers to pressing thundering crucial questions relating to the economic growth, unemployment and national debt even if the prelude did promise earth-shattering outcome from the debate and point the voters to a saviour new government.

The debate appeared more about who had performed the worst as government of the past: SDP or HDZ! Little was said about real and realistic solutions for the future that would help undecided voters make up their minds or, indeed, supporters of either jump ship and decide to support the other party. The TV host did try to provoke gently or prod the speakers so as to make the debate spring to life, be more spirited and stronger, even called the debate a conflict at one stage, which was fiercely negated by the two speakers, the debate was a right old fizzer.

The speakers left the impression that as far as any disagreements they may have on the important issues these were neither fundamental nor substantial, if at all existing.

No wonder that almost immediately after this fizzer of a debate, which left the voter no clearer as to the direction Croatia must take in bettering its living standards and democratic processes, a leading HDZ politician, member of Croatian Parliament representing the diaspora, General Zeljko Glasnovic, made his final decision to abandon HDZ and file Saturday 13 August with the electoral commission his own ticket of independent candidatures for the diaspora (Croats living abroad) electorate. His rather surprising move appears to have echoed positively particularly there where it counts for him: among Croats abroad. Indeed, it was the Croats abroad without whom the creation of the modern independent state of Croatia would not have been possible. So while Friday’s debate between SDP and HDZ suggested much of what Croatia fought for had recklessly been watered down General Glasnovic’s move injected new hope for a strong and focused future. His motives to go separate ways from HDZ are attached to his vision about what according to him is best for Croatia, for Croatian diaspora, for Croats living in Bosnia and Herzegovina and for the Croatian Homeland War veterans.

As member of parliament Glasnovic championed and persisted with the need for Croatia to impose lustration and rid its key public administration and corporations of former communists – rid itself of elements that work against investments, business developments and cause mass emigration of young people who have no or very little prospects for gainful employment in Croatia.

“ Primarily, it was my conscience that moved me to this. I cannot and I do not want to be a ‘fig leaf’ for interest groups nor just another mute on the parliamentary benches,” said General Glasnovic in his press release Saturday 13 August regarding his bold move to split from HDZ.
“If we want to survive as a nation we must set priority political goals… A quarter of a century has passed since the Homeland War and Croatia has still not successfully integrated its human and other available resources.
Why is Croatia remaining to be a dysfunctional state?
Interest groups whose primary interest lies in self-interest and not in the building of a functional and modern Croatian state have led Croatia for too long…
It’s scandalous that a Croat born outside Croatia needs about 3 years to receive Croatian citizenship. It’s also scandalous that people who have been destroying the Croatian state for decades still sit on the benches of our parliament and are present in all bodies of the government. Retroactive laws, which were supposed to reckon with business crime, war profiteering and with betrayal of national interests had never made it to the parliamentary proceedings. Academic and human resources lustration remain taboo topics in our society.
Without the establishment of a new value system Croatia will never experience a catharsis…”

And I couldn’t agree more – without a new value system that rejects and destroys every single and all spores of the former communist regime (or at least moves into a true return to the one announced in the speeches dr Franjo Tudjman delivered in 1990/1991), Croatia will forever struggle to complete the goals of full freedom and democracy it set out to achieve in 1990/1991 – democracy and prosperity. Ina Vukic, Prof. (Zgb); B.A., M.A.Ps. (Syd)