The flood of people shows no sign of slowing even though cold, wet and miserable weather conditions have set in. Over 250,000 refugees and migrants have passed through Croatia in past six weeks with the increasing likelihood and fear that transfer to other countries such a Slovenia to assist them in reaching their desired destination in Western Europe will not be possible. Hence, temporary accommodation places are being opened in Croatia, the latest being in Slavonski Brod (a disused building in past used for administration for INA company will be fixed quickly) to house some 5,000, and more and more countries painfully nursing the fear that they will be left with thousands of needy people and scanty resources.

The Humanitarian catastrophe is suffocating the very breath of all and normal living is fast becoming something that was.

The refugee and migrant crisis has centered on Serbia, Croatia and Slovenia in recent days as that route to Austria, Germany, Denmark, Sweden …gives rise to all sorts of touching stories of human compassion but also of those of fear of the unknown and what that unknown may do to the standard of life Europeans have been used to and have not been asked if they wish to share or lower.

Last week German Chancellor Angela Merkel has announced that her government will quickly send back all those arriving at its borders who are not genuine refugees but found to be people looking for a better life – illegal migrants. Reportedly some 190,000 already in Germany for some time have been identified as those to be deported, said Croatian HRT TV news from Friday 23 October. This seems to have poured deeper panic among those fleeing Middle East through Croatia and surrounding countries as they show urgency and impatience to reach their desired destination in Western Europe (before doors close?). So we come across desperate night transfers, walking across rivers in the cold of the night to reach Slovenia, the next stop on route to Austria, toppling fences and barriers – pushing and trampling on each other … Desperation on the rise.

It is clear by now that not everyone who is crossing European (or any other for that matter) is a refugee; many are migrants coming for other reasons than fleeing from persecution. Refugees are people who have been forced out of their home country against their will. The word “migrant” can mean someone who moves to a foreign country voluntarily, or it can be used as a broader umbrella term that includes refugees as well as voluntary migrants. For example, a Syrian man fleeing war is a refugee, whereas a Cameroonian man seeking economic opportunity is a migrant. Whether someone is considered a refugee or a migrant effects what sorts of legal rights they have: Refugees can apply for asylum and are protected by international and domestic law, for example, while economic migrants cannot. There is no such thing as an “illegal asylum-seeker” — refugees can seek asylum in another country without obtaining a visa or resettlement authorization first. Economic migrants, by contrast, are usually required to have a visa or other form of work authorization in order to immigrate legally. 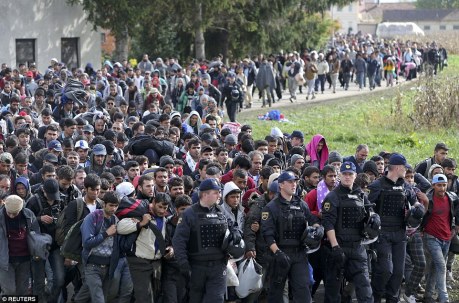 Distinguishing between the two becomes political, especially in a crisis like the one battering the life and the peaceful spirit of Europe. Calling a group of people “refugees” also acknowledges that such people are legitimately deserving of shelter and care, whereas calling them “migrants” can more often than not result in accusing them of arriving for economic reasons, and perhaps even lying about their asylum claims in order to exploit the “Western” entitlement programs, which, by the way the “Western” citizens have earned through hard work, through paying taxes and generally having had good economic and other governance throughout the past decades. Such stands are often called anti-immigration even in the face of the fact that if a “Westerner” wanted to go, work and live in an another Western country as his own renders him/her unemployed and destitute, he/she must obtain a proper visa, which is more often than not impossible to obtain.
In recent months particularly, the UNHCR has been asking that the people crossing the Mediterranean or coming to Europe via other routes such as the one across Greece be labelled ‘refugees and migrants.’ This stance appears to be a reasonable compromise in the efforts to deal with madness that has hit an unprepared Europe (World), but is also unsettling because it insists that refugees and migrants are fundamentally (as in UN protection entitlements) different from each other.
UNHCR: “…protecting refugees was made the core mandate of the UN refugee agency, which was set up to look after refugees, specifically those waiting to return home at the end of World War II.
The 1951 Refugee Convention spells out that a refugee is someone who ‘owing to a well-founded fear of being persecuted for reasons of race, religion, nationality, membership of a particular social group or political opinion, is outside the country of his nationality, and is unable to, or owing to such fear, is unwilling to avail himself of the protection of that country.’
Since then, UNHCR has offered protection and assistance to tens of millions of refugees, finding durable solutions for many of them. Global migration patterns have become increasingly complex in modern times, involving not just refugees, but also millions of economic migrants. But refugees and migrants, even if they often travel in the same way, are fundamentally different, and for that reason are treated very differently under modern international law.
Migrants, especially economic migrants, choose to move in order to improve the future prospects of themselves and their families. Refugees have to move if they are to save their lives or preserve their freedom. They have no protection from their own state – indeed it is often their own government that is threatening to persecute them. If other countries do not let them in, and do not help them once they are in, then they may be condemning them to death – or to an intolerable life in the shadows, without sustenance and without rights.”

The UNHCR ‘two kinds of people’ policy is, some say, troubling on many levels. “First of all, it undermines the humanitarian principles that should guide our response to emergencies. When people drown at sea or suffocate in lorries, our first question should not be ‘so, which kind were they, refugees or migrants?’ Narratives about ‘two kinds of people,’ are, paradoxically, a central ingredient in many of the conflicts that thousands are forced to flee,” writes Jørgen Carling, Research Professor at Peace Research Institute Oslo.
“The ‘two kinds of people’ argument is further undermined by the drawn-out trajectories of many current migrants. A Nigerian arriving in Italy might have left Nigeria for reasons other than a fear of persecution, but ended up fleeing extreme danger in Libya. Conversely, a Syrian might have crossed into Jordan and found safety from the war, but been prompted by the bleak prospects of indeterminate camp life to make the onward journey to Europe. Regardless of the legal status that each one obtains in Europe, they are both migrants who have made difficult decisions, who deserve our compassion, and whose rights need to be ensured”.

Justifiably, many will reply that rights of refugees and migrants cannot and should not be ensured at the expense or neglect of other people’s rights. Indeed, the domestic population of countries affected by this refugee and migration crisis finds itself pondering and agonising on this very truth.

Slovenian policemen escort a group of migrants from a train arriving from Croatia towards a camp in Sentilj, Slovenia, Friday, Oct. 23, 2015. (AP Photo/Petr David Josek)

This crisis is about millions of people who have been forced from their countries, or have made decisions to flee abject poverty, and need a new country to call home even though many do exclaim they want to return to their country once the war in their homeland stops. Addressing the crisis will require resettling the people on the run. Countries that seem capable of absorbing them, wealth-wise, are experiencing increasing unrest from their own citizens as political anxieties about large-scale immigration that come with the prospect of having to absorb so many cultural and religious strangers keep rising.
For those of who live in those countries, addressing the crisis and solving it means, at this stage, accepting that their communities will look and feel different from how they have in the past. It requires enormous sacrifice for many as they attempt adjusting their vision of how their future communities will look like and what changes will need to be made for a peaceful and respectful coexistence. This is a major “ask” of every government where floods of refugees or migrants are capturing the attention of media and authorities and yet it seems not many governments are addressing that question as equally deserving as dealing with the refugees and migrants.
There is an emergency European Union summit organized for Sunday 25 October and if it fails to produce a solution to the crisis that is acceptable particularly to the European citizens the coming weeks and months will see another crisis looming: EU states affected will likely start acting on their own with the primary aim to protect their own citizens and without a plan for expansion of refugee intake program. It’s been weeks since EU had delivered a decision to distribute refugees according to set quotas among different member states but this plan, encountering opposition in several countries, has failed to launch.

According to Xinhuanet news a draft for the EU emergency summit for Sunday 25 October the countries on the so-called Balkan migratory route (which includes Croatia) would no longer be allowed to transport refugees to neighboring borders without prior agreement with their neighbours. Such a motion is likely to be defeated but if it’s not it will cause enormous unrest in Europe and lead to life-threatening, highly-charged with anger and hatred instability for all: refugees, migrants as well as the domestic population. Ina Vukic, Prof. (Zgb); B.A., M.A.Ps. (Syd)

Thanks for following as always appreciate every like, reblog or retweet also our newspaper is added with all our posts daily below:

All our other main news can be found Ace News Services