It all depends on who is chosen for the new administration.

Donald Trump’s upset election win has set the media both here and abroad all aflutter about the probable direction of his foreign policy. Panicked internationalists already are proclaiming that the surprise outcome of America’s presidential election represents a great triumph for Russia’s Vladimir Putin, who is supposedly a great friend, if not the puppet master of Donald Trump. Since Trump has expressed both a desire for friendly relations with Russia and has made extremely critical comments about America’s NATO allies, Moscow, they contend, is the big beneficiary of the Trump electoral win.

Likewise, some internationalists speculate that the unexpected Trump presidency will also strengthen China’s hand. Again, the reasoning is that President Trump will undercut U.S. relations with Japan, South Korea and other traditional U.S. allies in East Asia. Beijing, the argument goes, would benefit greatly from such developments. More sophisticated analyses point out that Trump’s trade protectionist views could lead to tensions with China and might even undermine China’s growing power. But Beijing is still generally seen as better off than it would have been under a Hillary Clinton presidency.

Source: Donald Trump’s Foreign Policy: What Will He Really Do? | The National Interest Blog

I will be watching the appointments….those will be very telling on the international direction that the new prez has in mind…..

Here are the front runners for the top diplomat post……. 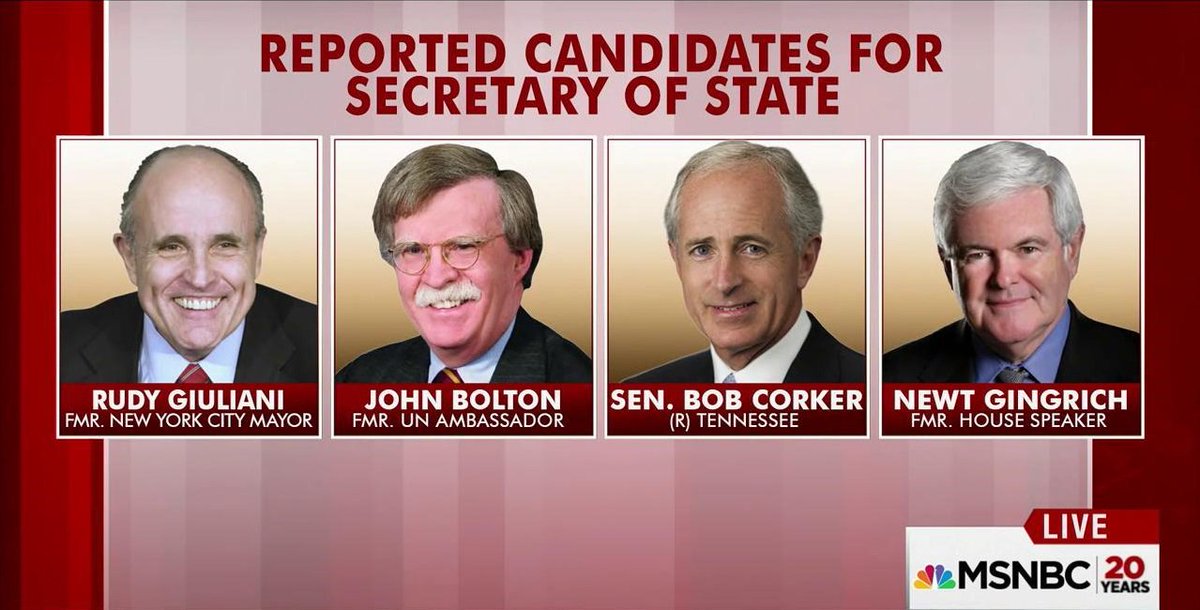 Scary…the only sane one of the bunch is Corker.…..Giuliani should not be in consideration in the first place…..why?

He has taken money from too many foreign entities……Venezuela, Qatar and Iranian entities….this is tantamount to the Clinton Foundation revolving door….you Righties remember what a deal that was when you listened to your candidate, right?

America’s mayor looks likely to be America’s top diplomat, Donald Trump aides tell the New York Times, with Rudy Giuliani sitting pretty as the president-elect’s top choice for secretary of state. The former NYC mayor would be what the Times calls a “startling choice” due to his lack of actual diplomatic experience. But that’s not all that might give the Senate pause before confirming him. According to Politico, Giuliani took money—said to be in the millions of dollars—as a consultant for multiple foreign governments. His benefactors included a state-run oil company in Qatar, a Singapore gambling project with ties to North Korea and organized crime, a Venezuelan state oil company controlled at the time by Hugo Chavez, and the oil ministry in Saudi Arabia.

Giuliani gave multiple paid speeches in 2011 and 2012 for an Iranian group called MEK, the Washington Post reports. It’s an exiled group of Iranian Marxists that “resembles a cult” and at the time was considered a terrorist organization. It’s that last part that could make Giuliani taking money from them illegal. And if Giuliani believes the MEK is Iran’s legitimate government, as the group claims, it could completely upend Iranian-US relations if he becomes secretary of state. While Giuliani is seen as the most likely candidate for secretary of state, he’s also been floated as attorney general, a position he says he won’t take, according to Fox News. Hillary Clinton was heavily criticized because the Clinton Foundation received donations from foreign governments while she was secretary of state; but Politico notes that Giuliani has actually profited from them directly.

Next year, Donald Trump will have Republican congressional majorities at his back, but that doesn’t necessarily mean the Senate will back all of his priorities.

And already, as the transition enters its second week, foreign policy is emerging as a potential trouble spot for Trump. It started with Dave Weigel’s report Tuesday that Sen. Rand Paul would be inclined to oppose John Bolton or Rudy Giuliani as secretary of state, arguing gingerly that he is merely defending the very positions Trump ran on:

All this has me thinking of a quote from H.L. Mencken.…”On some great and glorious day the plain folks of the land will reach their heart’s desire at last, and the White House will be adorned by a downright moron.