This American election has pushed Yemen from the headlines….for over a year now the Saudis have been bombing the crap out of Yemen...mostly under the pretense that the Shia Houthis were a threat to the sacred sites of Islam….not so sure.…I think it is that the monarchs were afraid of their hold on the wealth and power….

The conflict has destroyed much of Yemen…killed many civilians and left survivors hungry and without hope for the world has sort of pretended that it is a just cause for the Saudis….

There have been a couple of attempts to end the conflict but most peace tries have been in vain….but now the UN has a deal on the table….

The UN offered a glimmer of hope for a peace process 19 months in Yemen’s war last week, offering a peace deal which would see the installation of an interim government made of mostly technocrats, and in which former President Hadi would be a figurehead.

The Shi’ite Houthis, who had previously ruled out any deal in which Hadi was returned to power, expressed support for the UN plan as a “basis for discussion.” The deal would force Hadi’s main deputy to resign, and give Hadi little to no real power.

Hadi’s rejection, assuming it is upheld by his Saudi backers,means a continuation of the war, and greatly increases the likelihood that Yemen as a unified nation is over. The nation is already in a state of de facto split, and roughly on the same borders as before the 1990 unification.

This may ultimately make more sense for Yemen at any rate, resolving long-standing secessionist ambitions in the south, and leaving Hadi with control of South Yemen, where he is from, and where his limited political support is centered.

Split the country into North Yemen and South Yemen? Where have I heard this before?

North Yemen became independent of the Ottoman Empire in 1918. The British, who had set up a protectorate area around the southern port of Aden in the 19th century, withdrew in 1967 from what became South Yemen. Three years later, the southern government adopted a Marxist orientation. The massive exodus of hundreds of thousands of Yemenis from the south to the north contributed to two decades of hostility between the states. The two countries were formally unified as the Republic of Yemen in 1990. A southern secessionist movement in 1994 was quickly subdued. In 2000, Saudi Arabia and Yemen agreed to a delimitation of their border.
(Source: CIA – The World Factbook)

Although there are no cultural, ethnic and linguistic elements that could divide the North and the South of Yemen, the process of unification did not happen without conflict. In 1972 and in 1979, simmering tensions between the two Republics of Yemen led to fighting and attempts towards unification after these conflicts did not succeed. However, a draft constitution for a united State was written in 1981. In 1988, an agreement was concluded to demilitarize the borderline and exploit in common the oil wells discovered in 1984. The collapse of the Soviet Union, the main sponsor of South Yemen, and the cessation of Saudi aid to North Yemen, were determining factors in the movement towards the unification.

Unification implied a complete fusion of the institutions of both States, thereby obliterating the federal or co-federal options envisaged previously. Within 30 months elections had to take place in order to give legitimacy to the new government. 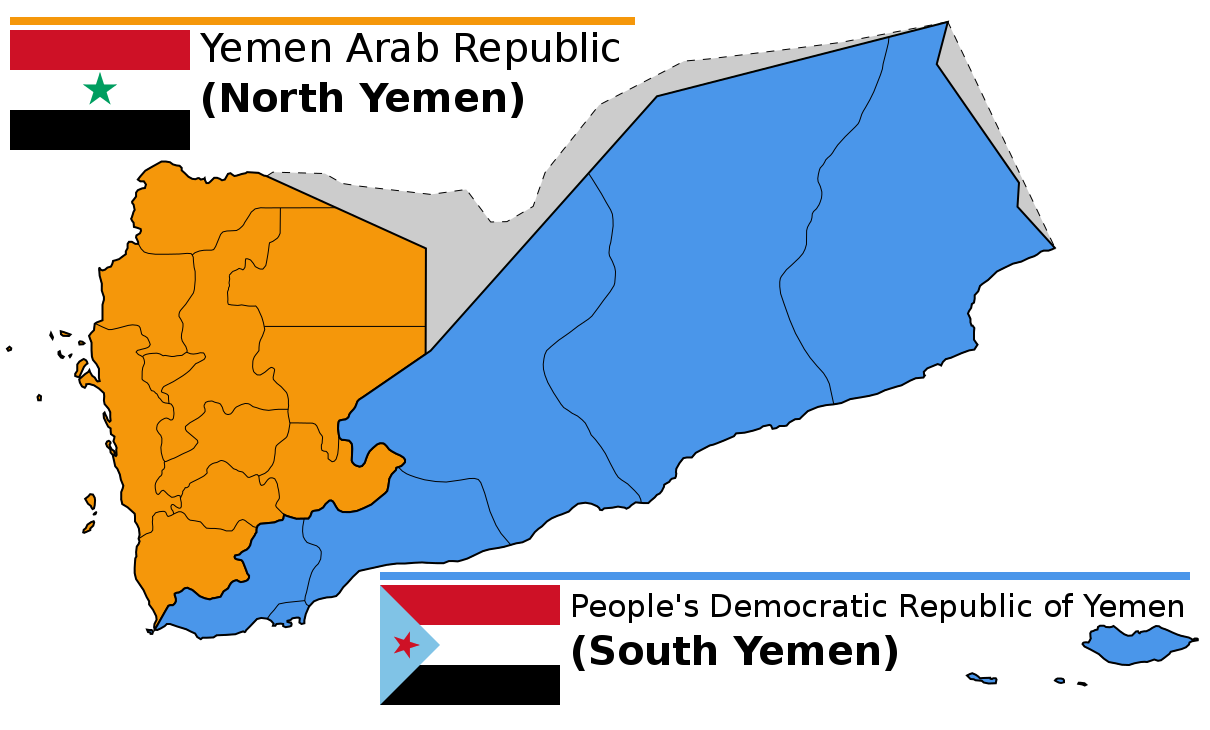 (the battle lines are breaking down along the very same borders)

All this was well and good but what benefit did it actually have? Not mush and actually it has been called “the marriage that could not be“……(and now for that dreaded historical perspective)……

In January of this year (2015), a group of Shi’a rebels in Yemen referred to in the West as the “Houthis” marched into the Yemeni capital Sana’a, forcing the current president Abd Rabbu Mansour Hadi to flee to the southern city of Aden and eventually leave the country altogether. These rebels were supposedly fighting to convince President Hadi and his administration to reconsider a constitution that would divide the country into six federal regions. The Houthis also accused the Yemeni government of willingly harboring al-Qaeda in the Arab Peninsula (AQAP) in the southern part of the country. Because of this, they see their conquest of Yemen as something justified to ensure the safety of Yemenis and security of the region.

Iran, the only majority Shi’a Muslim country in the world, has been named a likely supporter of the rebels for religious reasons. Meanwhile, Saudi Arabia, a Sunni majority country and spiritual home of Islam, has been sponsoring airstrikes against the Houthis to prevent their advancement and protect Sunni Yemenis. Because these two major Muslim powers are supporting opposite sides in the conflict, the crisis in Yemen has been portrayed as a “proxy war” between Sunni Saudi Arabia and Shi’a Iran. While it cannot be denied that both countries are at odds with one another and want to protect their interests in the region, the history and demographics of Yemen may say more about the conflict than any theories about foreign intervention.

Source: North and South Yemen: The Marriage That Wasn’t Meant To Be? |

Will Yemen breakdown into North and South again? If so then the last 20+ years have been for naught….could this be yet another problem that would have been better served by leaving it alone?

The failure of the latest cease-fire in Yemen suggests a long process of attrition is ahead. Neither side appears interested in a political settlement. The de facto partition of the country is increasingly likely.

The 72-hour truce barely ended before Saudi and coalition airstrikes resumed on targets in the rebel-controlled cities in northern Yemen.

The United Nations had said the truce was mostly holding, but the coalition charged that the Zaydi Houthis and loyalists of former President Ali Abdullah Saleh had violated it repeatedly. Saudi King Salman bin Abdul-Aziz Al Saud and UAE Crown Prince Mohammad bin Zayed met during the cease-fire and apparently agreed to resume the war.

Saudi-backed Prime Minister Abed Rabbo Mansour Hadi has rejected a United Nations road map for starting a political process. Hadi and the coalition remain committed to the 2015 UN Security Council resolution that demands Hadi’s return to power in Sanaa and the rebels’ disarmament. As long as that resolution remains the basis for negotiations, the war will go on.

Source: Is Yemen headed for partition?

There seems be yet another “peace” deal in the works……if successful will Yemen become a two nation nation yet again?

The UN peace plan for Yemen, which involves the creation of an interim unity government, appeared dead on arrival when it was endorsed by the Shi’ite Houthis as a promising start, but immediately condemned by the Saudi-backed Hadi government. New reports, however, suggest the Saudis may be breathing new life into the matter.
The plan would allow Hadi to hold a nominal leadership position, but insists it would be entirely a figurehead position with little to no real power. Hadi became Yemen’s president in 2012 in a one candidate vote, and unilaterally extended his two-year term in office beyond that date.
(antiwar.com)

If so then the last 25 years has been for nothing except thinning the population.