No Dogs, Catholics Or Muslims Allowed
// Croatia, the War, and the Future 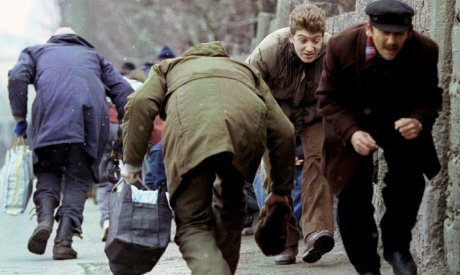 Civilians of Sarajevo in
Bosnia and Herzegovina 1993
running for cover to
avoid Serb snipers during the city’s siege
Photo: Chris Helgren/Corbis

The referendum held on 25 September 2016 in the entity of Serbian Republic (Republika Srpska/RS) within Bosnia and Herzegovina (BiH) regarding confirmation that 9 January should be set as public holiday for the celebration of the Day of Republika Srpska/Serbian Republic Statehood Day may to many in the outside world seem benign but given BiH’s geographic position coupled with the 1990’s history puts it all in a different light. But, in reality and in truth this frighteningly defiant move led by Milorad Dodik, RS president – and nourished and supported via Russia’s Vladimir Putin’s promises of financial supports – has all the hallmarks of officially legitimising war crimes, especially ethnic cleansing and genocide (including Srebrenica) committed during 1990’s against Croatians and Bosniaks/Muslims of Bosnia and Herzegovina/BiH in that self-proclaimed Serbian territory situated within sovereign borders of BiH.

It once again brings to a chilling reminder the chilling “banner”, the “warning sign” under which Serb aggression operated there in that BiH sovereign territory in the 1990’s: No Dogs, Catholics or Muslims Allowed. 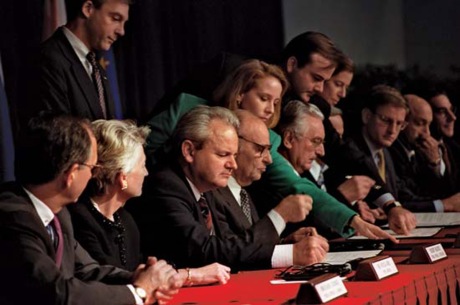 In November 1995 the primarily US-driven international Dayton Accords peace agreement ended the war in BiH and it preserved BiH as a single sovereign state, divided into two largely autonomous parts/entities: the Bosniak-Croatian Federation and the Serbian Republic. Dayton Accords, although made having peace in mind, in essence meant that peace had no chance as no conductive environment was created for proper reconciliation, in many ways the Serb aggressor was rewarded with its own region to govern autonomously. Dayton Accords agreement had sealed the fate of BiH as a sovereign state made up of three constitutional peoples (Bosniaks, Croats and Serbs) into a perpetual state of ethnic rivalry, recriminations, dysfunction and fear that Serbs were only “an inch” away from achieving their initial goal of creating their own sovereign state from parts of BiH’s sovereign territory they’d cleansed of all non-Serbs.

Milorad Dodik had officially, with apparent newfound determination, begun threatening to hold a referendum on secession of Serbian Republic from BiH in 2014 if Bosnia does not become a confederation of three states (Serb, Croat and Bosniak). At that time he sought to seize on the Crimean referendum and subsequent Russian annexation as a political and moral guide and an example of self-determination in action, however wrong, tragic and misguided these actions may have been held by the leaders of the Western democratic world. Dodik had planned for the referendum regarding 9 January as the Day of Serb Republic/ Statehood Day (which date by the way coincides with the Serb Orthodox religious holiday) to be held on 15 November 2015 but this and any such referendum was thwarted via BiH Constitutional Court’s ruling, making such referendums illegal.

Defying BiH Constitutional Court and BiH Parliament, to which Serbian Republic answers, the referendum held Sunday 25 September saw the Serbs living in that entity in overwhelming numbers voting Yes to declaring 9 January as the Day of Serbian Republic. The relatively very few Croats and Bosniaks now living in the Serb Republic (having returned there post 1995 Dayton Accords agreement) had refused to vote in the referendum because, in essence, the referendum represents Dodik’s rehearsal for an eventual secession of Serb Republic from BiH and, therefore, the destruction of BiH as the world knows it now.

A further element of defiance and repulsive attempt to legitimise genocide and ethnic cleansing committed by Serbs in this referendum can be seen through Biljana Plavsic’s comments as she voted in the RS representative office in Belgrade, Serbia. Biljana Plavsic, whose actions in 1992 as a member of collective presidencies of both Bosnia and the breakaway Serbian Republic of Bosnia constituted crimes against humanity and who actively supported the ethnic cleansing of Bosniaks and Bosnian Croats in Serb-held lands, who is an ICTY convicted war criminal said last week that the referendum represents a defense of Serbian Republic – of that in which she herself had participated in the 1990’s.

Whether the leaders of Croatians and Bosniaks living in BiH consider Dodik’s defiant move with the referendum as some kind of an internationally acceptable foundation for a movement that would split BiH into three different ethnically defined sovereign states (Bosniak, Croat, Serb) is at this stage a disquieting point occupying a great deal of political analyses space throughout the world. As desirable as contemplation of such a division of BiH into three sovereign states may appear to each of the three ethnic groups at this moment may be, this articulated in the media desirability or political assessment in essence masks the real and dangerous prospect of the possibility of repeated Serb violence and aggression against Croatians and Bosniaks in BiH.

Dodik’s defiance with holding the referendum and his subsequent defiance of the BiH State Prosecutor by refusing to answer a summons to appear before the prosecutor regarding his breach of the Constitutional Court order that declared the referendum illegal, are acts that are very likely to motorise the Serb population’s energy for renewed attacks against non-Serbs in BiH. Dodik has found it handy to interpret everything commented against his referendum as threatening to his personal safety and so:
“I will not go to the prosecutor’s office in Sarajevo but I am ready to give a statement in any other judiciary office in the Serb Republic,” Dodik told a news conference 27 September 2016. He therefore rejects the jurisdiction of the government of Bosnia Herzegovina to which Serbian Republic entity must answer. He has therefore, in his mind and in his deeds already cut Serbian Republic’s ties with BiH.
“If Dodik fails to comply with a summons, and fails to justify it, the prosecution will then issue an arrest warrant,” said Bosnia’s Security Minister Dragan Mektic, a Bosnian Serb.

All this says that Bosnia and Herzegovina is in a more dangerous state than at any other time since Dayton Accords in 1995, with looming possibility of renewed violence and crimes against humanity. It confirms that, despite atrocities committed in early 1990’s and guilt confirmed via international criminal tribunal and domestic criminal courts, Serbs have not learned to keep their fingers off sovereign territories and state borders that have been established/recognised on an international level for many decades. Collective catharsis associated with the atrocities and war crimes as some guarantee of lasting peace in BiH has made no progress despite Dayton Accords and the UN’s International Criminal Tribunal for the Former Yugoslavia (ICTY). This latest behavior of Bosnian Serbs evidences the fact that reconciliation in BiH (in former Yugoslavia, really) has been a pipe dream, and a utopian dream concocted by the West and the European Commission who thought that equating the aggressor with the victim would reap positive results of reconciliation and peace. Permitting Serbian Republic to exist within BiH in the first place was the beginning of that pipe dream, which was above all cruel to the victims of war crimes and, as such, it was never going to work. Daytom Accord should have either split BiH into three distinctive sovereign states (Bosniak, Croat and Serb) or insisted on retaining BiH as a single sovereign state without entities or divisions of autonomous territory between its constituent ethnic/national groups.

But as things have panned out, the world must cringe with disgust watching the referendum signatures of the majority of the genocidal Bosnian Serb “nation” celebrating without an inkling of shame or remorse their “state” founded on war crimes, forced deportations, ethnic cleansing, concentration camps, genocide, torture…and all that permitted by way of world leaders’ benign political statements that offer only political analyses of the past and no visible intention for decisive involvement to stop such lunacy that is creating new victims of the imposed ethnic Serb superiority in that region. This is a true perversion of justice for the victims of crimes against humanity and freedom to live peacefully anywhere within one’s country’s sovereign borders.

By way of referendum for Serb Republic Statehood Day Bosnian Serbs are erecting a monument to those who committed genocide. This comes without real sanctions and practical intervention against this shame for humanity as all of the political analyses and statements by world leaders about this appear more benevolent toward this Serb cause of celebrating genocide than toward anything else. Turbulent times are on the cards once again for Bosnia and Herzegovina; for Bosniaks and Croatians. Together with political instability in Macedonia, violent protests in Kosovo, the destabilisation of Bosnia and Herzegovina will have a destructive influence on the entire Balkan region. The referendum in Republika Srpska also perfectly shows how history can be used to drum up hostility between nations. Desirous of peace and life without fear, a life that moves away from daily infliction of pain contained in politically live reminders of the 1990’s war, Bosnian Croats may do well by utilising this latest practically unchecked Bosnian Serb defiance and seek their own independence or autonomy within or without BiH. Ina Vukic, Prof. (Zgb); B.A., M.A.Ps. (Syd)