Being There As Croatia Votes
// Croatia, the War, and the Future

A peculiar feeling to be a Croatian-American here in Zagreb this day of 11 September.

Yesterday was my birthday and I “investigated” Garden Pivovara in Zagreb as a potential another beer to import to Chicagoland HR diaspora. Only three months in production, GP sells in cans, not bottles…nice! We sampled all the products very carefully (LoL).

Today Zagreb dawned like any wonderful day a sunup run around Jarun lake and then get-down-to-business…Sabor election Day. “We shall see what happens”.

On my way to the main voting station in Zagreb, I walk through Cvijetni Trg. Normal day, street performers in custom singing and dancing. All normal except for a Zagreb election observer, with badge, getting a picture. In front of Kino Europa, kava flows and so does the every-day-typical gossip…normal. 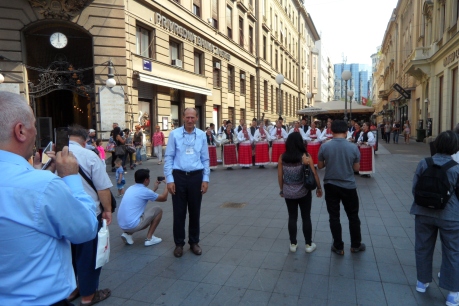 However, a four minute walk, West, you arrive at 18 Varsavska Ulica. Here is Osnovna Skola elementary school. This is the main voting station in Zagreb (total is over 650 of them, mostly at schools). This one provides for Croatians from wherever is hometown but needed to be in Zagreb today. With their proof of registration voter ID card in hand, there were two very busy receptionists with computer access to voter records to direct the voter to a room (there were 11 rooms) that included the voters hometown. All the voters in all of the rooms got the same ballot. All the ballots were printed in Croatian only, In California the ballots are printed in nine different languages. Readers can decide what that difference signifies. 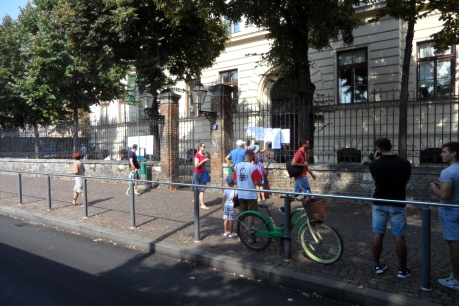 The voter folds their ballot and inserted into a box with a sealed lid. No computers involved, the ballots will be hand counted. Croatia, a nation of some 4.5 million people (not all who are eligible will vote [sadly] but still, that is a lot of paper-to-push.

The election workers awoke early and mostly on-station at 07:00 with the doors open at 08:00. Surprise, there were a lot of people waiting to vote. I inquired of them. Mostly they replied that they worked in a job at a cafe (or caffe) and so vote early first was their only option. I asked “considering the political situation in Croatia, economy and political animosity” why vote? The answer was always without hesitation: “I always vote, no matter anything else”. 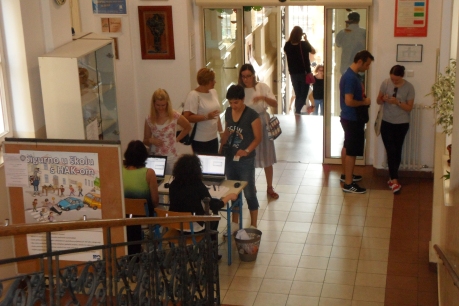 Walking to my car to retrieve my laptop to write to Croatish news good readers. A chance encounter.

With a small entourage of security staff, up walks President Kolinda Grabar-Kitarović. Like a regular sort of person, she bought flowers in Cvjetnik Trg. Despite her security staff, she was very approachable, I reminded her of our previous meetings in Croatian Embassy in Washington, D.C. of which she well remembered and I asked her election thoughts. She said: “We shall see what happens”.

And so we shall. I will be attending the HDZ HQ to observe and report the election results as it is posted. Of course I will be discussing the US Presidential election, in term of voter turnout to be comparing to Croatian voter turnout, but certainly my vision of comparing a Sabor with a “bridge” over Croatia’s political chasm and my futuristic vision of a future US Congress of 200 Democrats and 200 Republicans with 35 Independent Representatives. Can the Sabor rise up to be the world-wide demonstration that this is a future that will resolve political rancor and deprivation. “We shall see what happens”. 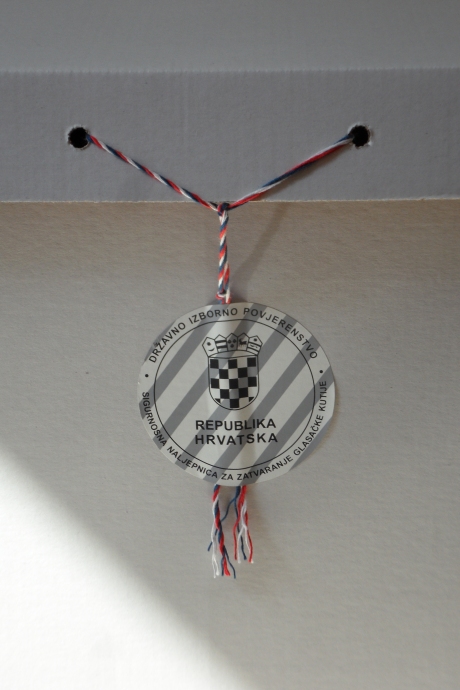 Here in Croatia this can be a splendid day to remember and celebrate. However, as an emotional Croatian-American, my personal conflict on September 11th is considerable. Soon, in America, the sun will arise over New York and 9/11 Ground “Zero” will again be first and foremost in the minds of all America an all Americans. Even here on election day, voting is what democracy is where the rubber-meets-the-road, we who are American Expats will gather together to remember that democracy costs a very large price tag. 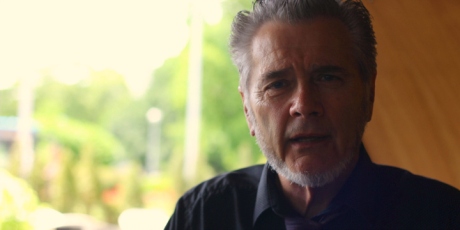