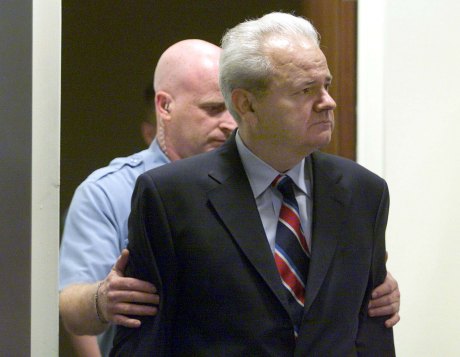 Former Serbian president
Slobodan Milosevic
is led into the courtroom
of the UN War Crimes Tribunal in The Hague 2002
PHOTO : JERRY LAMPEN/AFP/Getty Images

Dubbed “the butcher of the Balkans”, Serbia’s late Slobodan Milosevic almost rose from the grave with a bright halo glowing above his head last month when a handful of apparent Serb war crimes and Slobodan Milosevic apologists briefly succeeded in convincing much of the unsuspecting world that The UN crimes tribunal in the Hague had acquitted/exonerated him of war crimes committed in Bosnia and Herzegovina during 1990’s as part of joint criminal enterprise. Andy Wilcoxson and Neil Clark dropped into the world’s public arena a hotter than burning claim that sent members of Serbia’s leadership dancing in deliriums of denial and pathetic disregard for victims of horrible crimes in Bosnia and Herzegovina during 1990’s and false interpretation of justice – oblivious to truth and reality.

Neil Clark served the world (via RT) the evidently calculating sensational claim that the late Serbian leader Slobodan Milosevic, who died 2006 in The Hague cells, was

“exonerated… for war crimes committed in the Bosnia war …”.

Clark appears to have let himself loose and reckless, saying: “The ICTY’s conclusion, that one of the most demonized figures of the modern era was innocent of the most heinous crimes he was accused of, really should have made headlines across the world. But it hasn‘t. Even the ICTY buried it, deep in its 2,590 page verdict in the trial of Bosnian Serb leader Radovan Karadzic who was convicted in March of genocide (at Srebrenica), war crimes and crimes against humanity…There was no official announcement or press conference regarding Milosevic‘s exoneration. We’ve got journalist and researcher Andy Wilcoxson to thank for flagging it up for us…”

Well, hello Mr Clark – Karadzic’s trial was not Milosevic’s trial and Milosevic was not tried – he went on and died in prison before the evidence against him could actually be tested in the court of law.

Ah, Andy Wilcoxon. Well, he wrote on a pro Slobodan Milosevic website in July 2016 analysing snippets of the ICTY judgment against Radovan Karadzic as if they were snippets from a trial against Milosevic where adequate or applicable evidence against Milosevic was tested! Wilcoxon in essence pronounced Milosevic innocent of war crimes by addressing a handful of paragraphs in the 2,615-page ICTY judgment against Karadzic. How calculating and cruel can some articles appear! 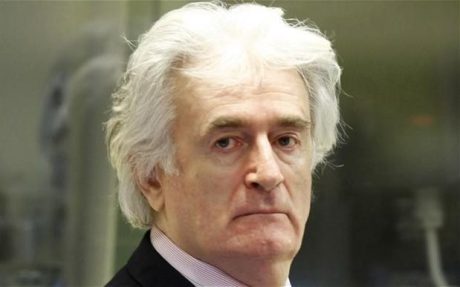 So, it was more than four months from the time the ICTY in the Hague delivered 24 March its judgment against Bosnian Serb leader Radovan Karadzic and sentenced him to 40 years imprisonment for war crimes committed against Bosnian Muslims and Croats during 1990’s war, which saw ethnic cleansing and genocide create the so-called ethnically clean Serb Republic within Bosnia and Herzegovina, that journalists Neil Clark and Andy Wilcoxson decide to interpret the ICTY Judgment against Karadzic as a finding of Slobodan Milosevic’s innocence and got the world thinking that Milosevic has in The Hague trial been found innocent of war crimes in Bosnia & Herzegovina. The full judgment does have 2, 615 pages (or 2,590 – depending on format at hand) and it takes time to digest that but one cannot but suspect that such articles purporting to confirm Milosevic’s innocence in Bosnia and Herzegovina were what “the doctor ordered” and to be used to feed Serbia’s deluded genocide denial, denial of any guilt in the war they started and played a critical role of aggression in it, regardless of whether that aggression was physical or verbal or political.

Wilcoxon in his article enumerates a selection of paragraphs from the Karadzic judgment that he says evidences Milosevic’s innocence but apparently fails to actually quote those paragraphs in full or link them to the actual ICTY Judgment (for the reader to access easily)! One of these paragraphs Wilcoxson heavily relies for his preposterous claim is paragraph 3460 and that one says:

“With regard to the evidence presented in this case (Karadzic case) in relation to Slobodan Milosevic and his membership in the JCE (Joint Criminal Enterprise), the Chamber recalls that he shared and endorsed the political objective of the Accused and the Bosnian Serb leadership to preserve Yugoslavia and to prevent the separation or independence of BiH and co-operated closely with the Accused during this time. The Chamber also recalls that Milosevic provided assistance in the form of personnel, provisions, and arms to the Bosnian Serbs during the conflict. However, based on the evidence before the Chamber regarding the diverging interests that emerged between the Bosnian Serb and Serbian leaderships during the conflict and in particular, Milosevic’s repeated criticism and disapproval of the policies and decisions made by the Accused and the Bosnian Serb leadership, the Chamber is not satisfied that there was sufficient evidence presented in this case to find that Slobodan Milosevic agreed with the common plan.” (Full Radovan Karadzic Judgment ICTY pdf here)

So, no sufficient evidence against Milosevic in Karadzic’s trial equals Milosevic’s innocence of the crimes as far as one can deduce from Neill and Wilcoxson’s incredulous claims. Wilcoxson enumerates several other paragraphs from the Karadzic judgment that mainly address meetings in Belgrade or in Pale (administrative centre of Serbian Republic then created by Serb’s as ethnically pure entity in Bosnia and Herzegovina) and tend to suggest Milosevic’s certain disagreement with the politics of Bosnian Serb leaders, but to me this is not evidence of Milosevic’s innocence. Indeed, Milosevic’s attitudes reportedly expressed at meetings do not necessarily automatically follow that he is innocent of the war crimes covered in Karadzic’s trial.

What’s even more disturbing is that most of Serbia’s media and some outside it promoted this deception for days, leaving that lie permanently available in the public domain. What’s further distressing and obscene is the fact that Serbia’s leadership via foreign minister Ivica Dacic (former member of Milosevic’s ultra-nationalist party) and labour and employment minister Aleksandar Vulin “have been expressing triumphant satisfaction for days about claims (Clark and Wilcoxson) that the International Criminal Tribunal for the Former Yugoslavia’s verdict convicting former Bosnian Serb political leader Radovan Karadzic also said that former Yugoslav President Slobodan Milosevic wasn’t guilty of genocide and crimes against humanity in Bosnia and Herzegovina. Dacic has said that the Karadzic verdict also shows that Serbia itself was innocent of wartime crimes in Bosnia and Herzegovina. But some Serbian analysts suggest that they are simply using these claims of Milosevic’s innocence in an attempt to rehabilitate the former leader’s policies and their own role in the wars of the 1990s, with which the country has never truly come to terms…”

Poor, wretched soul, Dacic, who accused the West of keeping quiet about Milosevic’s innocence because, if it spoke about the findings in ICTY Karadzic case about Milosevic’s innocence, then the West would tear down the justification for its politics towards Serbia! This man is truly mad! It doesn’t seem to cross his mind that Karadzic’s case was not Milosevic’s case and that the case did not pronounce Milosevic innocent nor would it have been just to do so (as all evidence tested was that to serve indictment against Karadzic).

An army of world’s top psychiatrists couldn’t heal this lot in Serbia from the devastating, dangerous delusions that include persistent and false sense of victimhood and denials of Serbia’s role in war crimes during 1990’s in Croatia and Bosnia and Herzegovina.

But, wouldn’t you know it – Russian Pravda swiftly published a piece after Clark’s article saying that “International Criminal Tribunal for the former Yugoslavia in The Hague quietly acknowledged the innocence of former president of Serbia and Yugoslavia, Slobodan Milosevic and went on with an interview with the French/ Russian journalist Dimitri de Koshko, another Milosevic apologist it seems, who went on to say: “Today, we are talking about the trial in The Hague that has seen its legal ending only now. Milosevic was posthumously and very quietly acquitted by the Tribunal.”

Unbelievable garbage! Nobody can be acquitted or found not guilty via a trial held against someone else!

The Tribunal did not acquit Milosevic. Trial against Milosevic stopped when he died. Did not continue! Did not finish. Perhaps Croatia and Bosnia and Herzegovina should join forces and seek to have it finished posthumously.

The indisputable facts are that Slobodan Milosevic presided over and oversaw the worst atrocities committed against humanity since WWII on European soil. Serbia’s soldiers as they entered Croatia’s Vukovar in 1991 with guns, knives, bombs, tanks sang: “Slobo, Slobo (meaning Slobodan Milosevic) bring us some salad, there’ll be meat – we’ll slaughter the Croats”; thousands of Bosniak men and boys slaughtered in Srebrenica in Bosnia and Herzegovina under the banner of Serb superiority and land theft – to just mention the very tip of the horrendous iceberg of war crimes committed.

Has Milosevic been exonerated of war crimes in Bosnia and Herzegovina? Has he been found or declared innocent? Heck no – not by a court of law; just by handful of journalists twisting and bending facts about the most serious matter of human existence – crime – to suit a political agenda that has nothing to do with justice. Ina Vukic, Prof. (Zgb); B.A., M.A.Ps. (Syd)