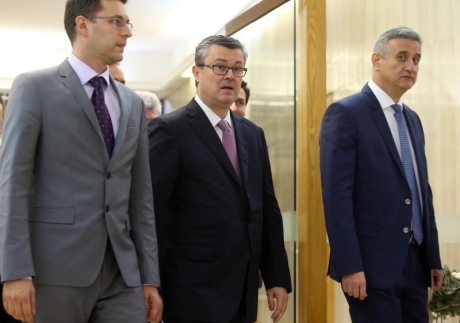 Timothy Less (a UK based political analyst on Eastern Europe according to LinkedIn profile in which he claims that his “primary role is running the Nova Europa political risk consultancy which helps businesses and international organisations to understand the impact of politics on their interests in Eastern Europe” ) wrote 5 January in International Policy Digest that with its new coalition government Croatia is embarking on a political experiment which, his article suggests, is destined to fail!

“Croatia is embarking on a political experiment: a coalition government comprising the conservative Croatian Democratic Party (HDZ) and the insurgent Most party, led by a non-partisan prime minister, Tihomir Oreskovic, a businessman who has spent much of his life in Canada,” Timothy Less writes and continues: “…If all now goes according to Most’s (Bridge coalition of independents that is forming government with conservative HDZ ) plan, a reformist leader (Tihomir Oreskovic) with a track record of success in business will start to extricate Croatia from its long-standing economic malaise, marked by slow growth, high unemployment and dangerous levels of both public and private indebtedness… However, things may not turn out in the way that Most hopes. For one thing, Oreskovic will struggle to impose his authority. Not only is he a political unknown, but the party he represents is already losing its power base. Many of Most’s supporters voted to change Croatian politics and have instead seen Most put one of the establishment parties into power. If social media is a reliable guide, these supporters are already abandoning the party…”

Timothy Less goes further and prognosticates utter doom and gloom for Croatia in 2016 seemingly because – he suggests – the larger part of the new governing coalition, HDZ, will not – he says – want to be in government with Most/Bridge coalition for too long and will “spend the next few months picking squabbles with Most, distancing itself from controversial policies and reaching out to the key constituencies whose support it must win over ahead of the next ballot.” He further claims that Tihomir Oreskovic, the Prime Minister designate, will “struggle to control a cabinet comprised mainly of HDZ ministers and a parliament in which Most has just 18 (out of 151) seats,” and says that “2016 is likely to be a dismal period in Croatian politics, characterized by ineffective government and an incoherent policy agenda as the different parts of the coalition pull in different directions.”

A similarly biased analysis on governance value and immediate political flop that appointing of Tihomir Oreskovic as Prime Minister of Croatia will supposedly mean for the country was recently written by Tomislav Jakic, a journalist based in Zagreb Croatia, whose article “The Victory of Norval” not only assumes (like Timothy Less) that lack of political party alliance or belonging in a government head spells doom and gloom and inability to control the politicians in parliament, but it maliciously and wrongfully asserts that Croats living abroad and those living in Croatia are not equally Croatian. The latter platform is the hateful stand promoted by communists of former Yugoslavia and many subscribing to the left or centre-left political mood in Croatia today and it aspires to undermine the unity of all Croats – those in Croatia and those in diaspora.

“…Norval has defeated Zagreb,” writes Jakic, “The diaspora has overpowered the so-called homeland Croatia. All the citizens of the Republic of Croatia who were born in it, worked in it and earned their daily bread in it honestly are offended and humiliated because a man, although born in Croatia, but had lived abroad for such a long time (mostly in Canada) that he even does not speak well his mother language, is being brought to them as their Prime Minister. And that the immediate message to all from Croatia, to all who have earned their professional knowledge in Croatian schools and universities and applied them here and in the world, is that they are incapable, that there is not a single person living in Croatia capable of being a Prime Minister…” wrote Jakic.

This article by Jakic is not to be taken lightly – it is a serious attack on democracy and equal opportunity for all citizens of Croatia (no matter where they live in the world) to advance their life and professional and political circumstances as best their merit permits. It represents a loud element of a cancer that works at deteriorating the unifying fabric of all Croats in the world and as a suffocating force whose primary role is to disable and render ineffective all attempts to bring the essential reforms into Croatian economy, public administration, justice…so that it finally moves further away from the communism from which it stems. Tomislav Jakic’s said article represents the discrimination that anti-discrimination laws exist for – it is an appalling behaviour coming out of a pen of a journalist.

Timothy Less and Tomislav Jakic, and all others who use “old” measures to predict the future under “new” measures, appear to disregard the important fact that since it broke away from communist Yugoslavia in pursuit of democracy 25 years ago Croatia has had elected politicians only at the helm of its governments and these politicians failed to bring about the necessary changes and reforms essential to a well-functioning, just democracy that offers equal-opportunity to all of its citizens in contributing to its prosperity. Political suitability, protectionism, political and economic and public administration and judicial corruption had lost ground somewhat during those 25 years but not enough to mark real progress. Strong reforms are required in Croatia on all fronts of public administration especially, much stronger than those that had occurred. The idea of such reforms is not popular but it is the agenda that is seeing the formation of a new government.

I for one will always barrack for an opposition to a government because a parliamentary opposition has a very important role to play in the progress of public and citizen’s life but opposition based on ideological or discriminatory outbursts that are utterly unfair to a human being, not only a citizen of a country, is something that is abhorrent to me.

The government formed in Croatia is likely to be the one with the main goal of achieving the needed, albeit unpopular, major reforms and as such it is not likely to be popular with everyone but one can safely say that most Croats recognise the need for major reforms. Some people may not like it but they do recognise the need for major reforms and, therefore, there is a politically impacting chance that many who do not like the major reforms announced would ultimately be convinced of the benefits of those reforms. Most/Bridge coalition says that it is adamant it wants to govern in coalition with HDZ/Croatian Democratic Union and in this to have an important input into the key government departments/ ministries, such as justice and internal affairs that are essential in achieving the needed reforms. Sweeping reforms to public administration that will likely see a rather notable reduction of government administration and departments and red tape in order to further ease economic and investment growth as well as administrative processes involved in daily living are being flagged.

There is an underlying truth unfolding in the current political resolve of forming the new government in Croatia and that resolve has a great deal to do with the firm intent to effectuate the unpopular reforms that are needed, to bring home the reality of the well-worn although not always warming idiom: “No pain, no gain!”. Good luck, I say – about time! So many habits and stifling administrative processes and attitudinal elements from communist Yugoslavia still exist in Croatia and they must be rooted out. Ina Vukic, Prof. (Zgb); B.A., M.A.Ps. (Syd)