It does not need to be pointed out that a country cannot step into a democratic political system from a communist dictatorship overnight, or without dedicated resources that would draw up and act on plans to help rid the country of a remnant communist mindset. It’s been over 25 years since Croatian people voted overwhelmingly in April 1990 for a multi-party parliament based on campaign for a greater sovereignty and eventual independence of Croatia from communist Yugoslavia. At the first sitting of the parliament on 30 May 1990 President Franjo Tuđman announced his manifesto for a new Constitution (ratified at the end of the year) and a multitude of political, economic, and social changes, and how best to achieve them, that would be the backbone of the independent and democratic Croatia. The war of Serb aggression quickly ensued against Croatia and did not completely end until 1998. This of course meant that much of Tudjman’s prescriptive manifesto for how best to achieve democracy and shed communism could not be implemented. And, of course, after his death in December 1999, former and die-hard communists came to government as well as the office of president and this saw a most damaging period for democracy in which de-Tudmanisation occurred based on lies and falsehoods especially regarding the Homeland War whereby victim was being equated with the aggressor; a period in which those in power sought to feed nostalgia for communist Yugoslavia and Josip Broz Tito even though Tito (who died in 1980) and Yugoslavia were much hated by much of the Croatian population. One could say that the powers that be in Croatia at this time after Tudjman’s death worked against the sentiments and political moral fiber of much of the Croatian population.

It goes without saying that to move truly into a democracy Croatia must confront and condemn the dark side of the communist era under Tito and his followers and this has been difficult as opposition and sabotage are very active. When faced with a government that proclaims Tito’s righteousness even though it is undeserving then a huge problem and perpetual division among people exist. But, every once in a while we come across a positive and notable step towards ridding Croatia of the dark ghost of Tito that continues stifling democratic progress in many subtle and not so subtle ways.

Thousands filled the Vatroslav Lisinski Conert Hall in Zagreb on Saturday 31 October 2015 to witness and be present at the posthumous judgment against Josip Broz Tito, the President, the Marshall, the Judge, the Jury and the Executioner, the Dictator of the former communist Yugoslavia delivered by the Croatian National Ethical Tribunal for his crimes against the Croatian people. As these things go in a country like Croatia where communists and former communists control the mainstream media one did not find out about this most important event via that media. Many distinguished guests, academics, former Croatian parliamentarians and government ministers spoke but perhaps at this point it is most significant to note the words of the last speaker of the day – Franc Breznik, member of parliament of Slovenia (Slovenian Democratic Party):

“Today in Croatia, with the ethical condemnation of Tito, Croatian Nurenberg occurred. After the Nuremberg trials, which commenced on 20 November 1945 began the process of De-Notification of Germany. Today’s ethical condemnation of Tito and his ideological followers will start the DE-comunisation of Croatia, Slovenia and other parts of other states that were once part of communist Yugoslavia. Now it is up to us in Slovenia to follow your example Croatia,”said the Slovenian parliamentarian, earning thunderous applause.

People came from all over Croatia, Bosnia and Herzegovina, Slovenia and from around the world – especially representatives of the Croatian diaspora. Also present were representatives of many major veterans associations, from those who have stood in protest for veterans’ rights for almost a year now at Savska 66 in Zagreb to members of the Committee for the defense of Croatian Vukovar.

Prior to the judgment being delivered Dr Marko Veselica – a former dissident and a former political prisoner in Tito’s prisons – and Mr Nikola Stedul, who survived an assassination attempt (five bullet hits) by UDBA’s (Tito’s Communist Yugoslavia Secret Police) agent Vinko Sindicic in Kirkcaldy, Scotland in 1988, spoke. Then Anto Kovacevic, who spent seven years in hard-labour prison for telling a joke about Tito, also gave witness as to the criminal acts and depraved revenge Tito effectuated against all who dared think differently. Kovacevic’s clearly articulated and unequivocally adopted position that without lustration, democracy or economic recovery were not possible for Croatia was met with resounding applause. Other, speakers among many included Eva Kirchmayer Bilic, Dzemaludin Latic and Mladen Pavkovic. 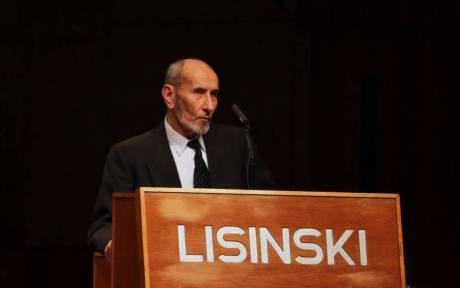 Nikola Stedul
A victim of and witness to
communist crimes by
Tito and his followers
Zagreb, Croatia 31 October 2015
Photo: Oskar Sarunic

Ante Glibota, vice president of the European Academy of Sciences and Arts and Literature spoke about lustration as intercession for a democratic future. For ethical condemnation criminal Tito and his ideological followers came to a large number of Slovenians, which present very strongly welcomed by long applause. Roman Ljeljak, a well-known Slovenian public advocate for the disclosure of Tito’s Partisan army’s post-WWII perpetration of genocide and war crimes and the UDBA assassinations of Croatian political emigrants in Europe, especially in Austria, spoke about the Huda pit (mass grave of innocent 2,000 Croats, 700 Slovenians and 300 German nationals) and the murder of Croatian emigrant Stjepan Crnogorac by UDBA.

Sister Bernardica Crnogorac
spoke of her brother Stjepan’s murder in 1972
and that the communists still
hold secret the place where his remains were left
after his murder in Salzburg by communist secret police
Photo: Oskar Sarunic

Dr Zvonimir Separovic, the president of the Croatian National Ethical Tribunal (and Croatian Victimology Society), then moved that the Tribunal attends to the main point on the day’s agenda.
The Croatian National Ethical Tribunal in this its Fifth Judicial sitting, deliberated in this trial against Josip Broz Tito and the Yugoslav Communist totalitarianism on the ethical charges brought on 25 June 2015 for genocide and other serious crimes committed against Croatian people. The tribunal comprised of thefollowing members: Zvonimir Separovic – President of the Tribunal and members Nikola Debelić, Zdravko Tomac, Josip Jurcevic, Zdravko Vladanovic, Zvonimir Hodak, John Kozlic, Bozidar Alic, Ante Beljo, Nevenka Nekic and Tomislav Josic. Josip Broz Tito and the Yugoslav communist totalitarianism were convicted of these criminal charges by the Tribunal.

“Hence, it’s by pure chance that Zoran Milanovic’s case as one of the remaining Tito’s followers has come up at this time. He is judged on two bases: as a follower, a man who even after the discovery of 1700 mass graves and Huda pits he had the audacity to repeat that Tito was the best thing that Croats ever had”. The Ethical Tribunal thus convicted Milanovic.

Croatian National Ethical Tribunal is a great thing that has happened to the Croatian social conscience scene since 1990 as it gathers large crowds that deal head-on with the dark past of communist crimes that must be dealt with – it is a great pity that government authorities in Croatia look past this as if it had to do with some other people not their own descendants or those victims still living. It is by no measure an easy thing to do what the Ethics Tribunal is doing for these champions of democracy are quickly and maliciously and above all undeservedly labeled by communist nostalgics as fascists or Ustase. It goes without saying that much of the opposition to the process of condemning the Yugoslav communist regime for its crimes is ingrained in the resistance for such in descendants of communists or former communists themselves. Purging itself of communist past with decisive condemnation of its crimes continues to be a most difficult task for Croatia but – not an impossible. Persistence is the key to success! Ina Vukic, Prof. (Zgb); B.A., M.A.Ps. (Syd)

Thanks for following as always appreciate every like, reblog or retweet also our newspaper is added with all our posts daily below:

Disclaimer: This article is provided by Ace Worldwide News Group but not always published by ourselves, attribution will always be added in this case.

All our other main news can be found Ace News Services