Refugees and illegal migrants making their
way from Greece to Macedonia
to continue into EU
Photo: AP Photos/ Sakis Mitrolidis

Countless thousands of refugees and illegal migrants from war-torn Syria, Iraq and other Middle East territory, Africa… are reaching Europe via Greece and Italy as points of entry in particular. According to interviews published on all world’s media all those coming from Greece across Macedonia and Serbia and Hungary are intent on making it to Germany, Belgium, Sweden, Netherlands, United Kingdom… they know where they want to go and expect to succeed in it, trampling over and destabilising European countries they cross towards their desired destination.

Refugees and illegal migrants of today appear to have expectations that they will reach their desired destination and stay there. How very different from the refugees fleeing WWII Europe – most were happy to wait in refugee camps and go to a country offered to them. Personal preferences played little part. 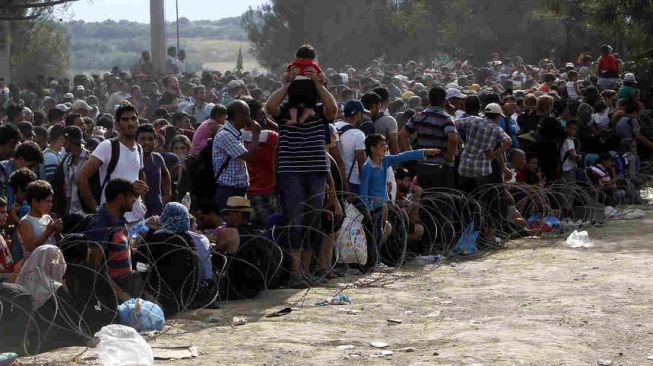 Today, we are seeing a humanitarian crisis unfolding before our eyes, a political crisis and a standard of living crisis of those living in the countries where this is occurring. We witness a great deal of criticisms directed to the countries or individuals for seemingly failing to assist or for using caution in allowing total strangers into their towns, countries etc. We have seen force being used at the Macedonian border with Greece against the refugees and illegal migrants; tear gas used to send them back to Greece…and then let them trough, or they break through police lines, in order to reach other countries where they want to go.

While doing everything within its power and control on a humanitarian base to assist the needy, to my view, countries have a moral obligation in protecting their borders especially when it’s known that there are most likely many Islamic State affiliates or fighters or supporters among them. And who can assure me that this is not a strategy to strengthen the IS within Europe? Please do if you can with certainty.
Croatia, has so far avoided the avalanche simply due to its geographical position. But, after Hungary builds its 174 Km, 4-meter high border wall with Serbia, Croatia becomes an alternative route for the entry of refugees into the Schengen Area. Croatian government has said all past week that it has a strategy how to care for refugees and illegal migrants and has begun preparations in the event that refugees and illegal migrants start entering Croatia en masse.
According to HRT TV news from 21 August 2015 “Croatia has enough facilities from Ilok to Dubrovnik that can accommodate immigrants if it is needed. There should be no problems as far as the accommodation of refugees is concerned. State Office for Property Management has a list of fifteen potential facilities which can be quickly put into operation if it is required“, said Mladen Pejnovic, director of the Office of Government Owned Property Management.

There are, according to Pejnovic, about 15 disused large objects that can be fixed and ready for use fairly quickly, if required. The majority of these facilities are former, now disused, army barracks, coastal resorts with unresolved ownership issues, as well as facilities, which Croatia received according to the agreements on succession of the former Yugoslavia.

While a will to help the needy is a gesture we should all follow, this declaration by Croatia’s government certainly seems most irresponsible, as it does not address the reality pressing upon Croatia’s own people and indeed the population of other European countries caught in this avalanche of fear, misery and instability. Croatian government announcement of having enough space to house refugees fails to address the safety of Croatian people and alarms raised in Schengen Zone countries, such as Germany, regarding behaviour of some EU countries not taking their “share” of refugees and illegal migrants. It, also, lacks criticism towards the UN for failing miserably at pooling resources of all UN member countries and establishing safe, clean and decent refugee camps at agreed sites across various countries.
This way, fear and uncertainty and human misery seem to be the only “currencies” UN is interested in.

Germany has called on Britain to take more of a share of migrants coming into Europe. Interior minister Thomas de Maiziere said along with other countries it needed to be ‘more aware’ of its responsibilities as a member of the European Union. He made his call for the British to welcome more refugees after it was revealed Germany expects to receive 800,000 asylum applications this year – more than all 28 EU countries combined in 2014. Britain is not of the Schengen area of 26 European countries that have removed all border checks and passport controls between each other. It has an opt-out on taking part in a scheme to distribute migrants arriving into the EU between different countries and has so far refused.

Back in Croatia, Mirela Holy, leader of The Sustainable Development of Croatia (ORaH) a small green party and member of Croatian parliament has Saturday, 22 August 2015, sent to Prime Minister Zoran Milanovic, and his government, an open letter regarding a refugee wave that has swamped the Balkans, calling on him to present a strategic plan for refugees, if his government had one, and to explain to the public how it would be implemented, reported HRT TV news on Saturday.
She also asked the PM how much budget funding had been set aside for the accommodation of refugees and their basic supplies and whether Croatian intelligence services cooperated with other countries’ services to efficiently prevent the infiltration of terrorists traveling with refugees, as well as how the government planned to prevent possible acts of terrorism and whether the security aspect of the crisis was being considered at all.
She said that the refugee crisis was a consequence of conflicts in Syria and other countries in the Middle East and that the exodus of a large number of people from those areas was expected to continue if no peace and security was established there.
Holy added that considering the fact that this was unlikely to happen without an international intervention led by the UN, Milanovic should inform the public about the government’s position on securing peace and stability in those regions militarily.
The EU has warned that it is currently facing ‘the worst refugee crisis since the Second World War’. Its border agency Frontex has said some 340,000 migrants have arrived already this year.
“This is an emergency situation for Europe that requires all EU member states to step in to support the national authorities who are taking on a massive number of migrants at its borders,” said Frontex Executive Director Fabrice Leggeri.
“Frontex has called on member states to provide additional equipment and people to support our operations in Greece and in Hungary and the European Commission has approved national programmes to provide significant financial assistance to the Member States to address these challenges,” he added. 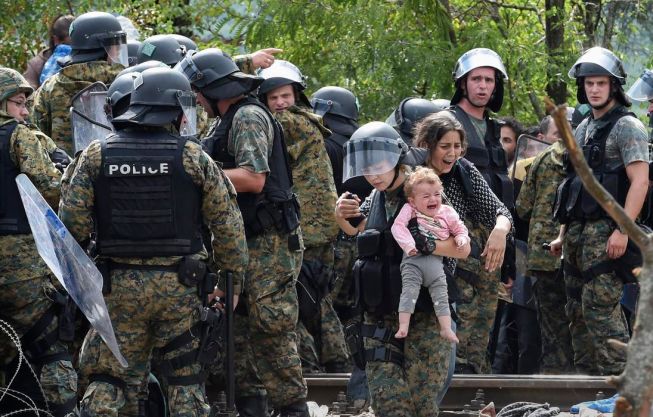 A member of the Macedonian special police forces holds a baby as migrants try to cross into Macedonia near the southern city of Gevgelija, 22 August 2015 Photo: EPA/Georgi Licovski

Croatia has always been willing to assist and take a quota of refugees (550 was the most recent number confirmed by the government) but I believe that the government’s announcement of having adequate space in disused objects to receive refugees and illegal migrants may be deceitful (as no limit to numbers these objects can take are mentioned) and encourage the avalanche to start falling on Croatia much before Hungary builds its announced border fence. It’s a shame we haven’t heard more about the plan or strategy Croatia’s government has developed to contribute in dealing with this humanitarian crisis, but I too suspect it hasn’t got a tight strategy. And it must! People in Europe are torn between the instinct to offer shelter and help to those in need and the instinct to shut the borders, lock the doors, while the leaders portray no unity in this crisis that’s threatening all – no one seems to be helping the other and no major UN Security Council meeting on this at the horizon. This is not a passing storm or an avalanche that will come quickly and dissipate just as fast. Ina Vukic, Prof. (Zgb); B.A., M.A.Ps. (Syd)