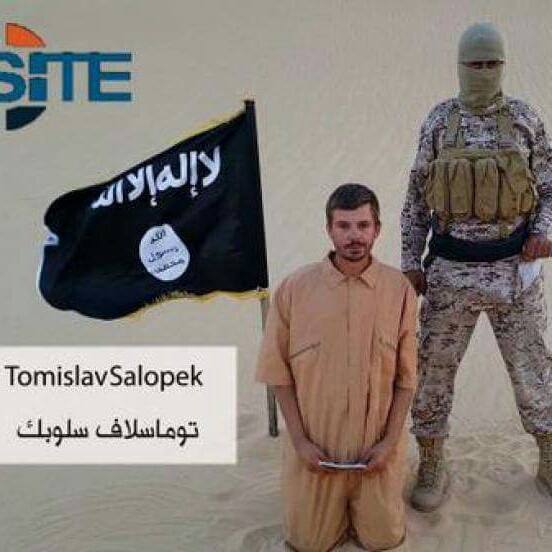 This image made from a militant video posted on a social media website on Wednesday, Aug. 5, 2015, Hostage: Tomislav Salopek A Croatian working in Egypt

The desert road kidnapping and claimed beheading by Islamic State (IS) fighters last week of a Croatian citizen, 30-year old Tomislav Salopek, temporarily working for a French geoscience company, CGG Ardiseis, as oil and gas surveyor, who was snatched in broad daylight on the outskirts of Cairo, is the first of its kind involving a foreigner in Egypt. The fact that this atrocious act is sure to deal an almost irrecoverable blow to Egypt’s government’s efforts to project stability, which would attract foreign investment and influx of foreign skills needed to support an economic turnaround following years of unrest in the wake of Egypt’s Arab Spring, is not what the West should be worried about. In the big scheme of worldly affairs Croatia is a small country but the fact that the capture and reported beheading of Salopek “for his country’s participation in the war against the Islamic State” reverberates the terrible truth that IS’ has counted on and is counting on using individuals wherever they are for targets whose death spreads immobilising fear. Such method of terror, as we know, can occur on the territory where IS fights or on “our” territory through.

In a brief statement, CGG said: “His car was stopped by an armed group who forced the driver to leave the car and then took off in an unknown direction.”

Initially, Salopek’s captors did not demand money but set a 48-hour deadline for the release of “Muslim women” from Egyptian jails – a reference to the hundreds of female Islamist prisoners (considered to be members of the banned Muslim Brotherhood) detained in a sweeping government crackdown following the 2013 ouster of the country’s Islamist president, Mohammed Morsi.

On Thursday, 13 August 2015, the Islamic State group’s radio station, Al Bayan, announced that its Egyptian affiliate had killed Salopek, the first word from the extremist group – media reported.
Authorities, though, still have not confirmed the authenticity of the claim and are continuing the search for Salopek in isolated areas of Egypt, including the restive northern Sinai Peninsula, where Egypt’s Islamic State affiliate is based, and the vast Western Desert, which is a gateway to volatile and lawless Libya, home to its own Islamic State branch. Croatians all over the world and friends pray that Salopek is still alive.

Croatian foreign minister Vesna Pusic travelled to Egypt amid this terrible time and said she has met with representatives of about 80 other Croatian citizens working in Egypt and the Croatian government has demanded stronger security measures for them, including the protection of the Egyptian army.
Croatia’s Foreign Minister Vesna Pusic said that Tomislav Salopek was captured by a different group than the Islamic State and was only given to ISIS once a ransom wasn’t paid by Salopek’s company, General Geoscience (CGG), reports Al Arabiya.

According to Croatian newspaper Vecernji List, the terrorist organisation responsible for the kidnapping and reported beheading of Croatia’s Tomislav Salopek is the Jamaat Ansar al-Sunna. However, it would seem that not enough relevant information about this group has been published there that would place it into the Islamic State fighters that it seems to now be.

Jamaat Ansar al-Sunna group like jihadi groups traces via its supposed heritage an ideology of explicitly espousing the restoration of the Caliphate and, according to reports, politically the group tended to take a more ‘moderate’ stance in affiliating with the insurgent nationalist ‘Iraqi Resistance’ political council until last year.
The reassertion of Jamaat Ansar al-Sunna’s jihadi identity and roots has been made more clear during 2014 with a tract from the group’s leader calling for the unity of the ‘mujahideen of the Ummah’ and the late-2014 statement marking itself out as a ‘jihadi faction’ rather than a mere ‘armed Sunni faction’.

And so, it would seem that the Croatian foreign minister Pusic needs some more lessons in Islamic State and all the groups and ways it operates with. Islamic State is the ultimate result for the Mujahideens and all other groups committing terror and murder in the name of IS. And didn’t the Croats of Bosnia and Herzegovina experience the terror and the insufferable brutality of Mujahideens that made up a part of the Muslim led, Army of Bosnia and Herzegovina in the 1990’s war!

In July 2015, an ISIS video (taken off Youtube) encouraged Muslims in the Balkan countries to take up arms and establish Sharia Law in the region. Meanwhile in March 2014, Brown Moses reported that ISIS had taken control and was using Croatian weaponry the group hijacked from convoys meant for the Free Syrian Army. “…it seems extremely likely these weapons are the same ones purchased from Croatia, by Saudi Arabia, and smuggled through Jordan. Now, despite the best intentions of those who were involved with providing these weapons to the Free Syrian Army, these weapons are being used to attack Iraqi government forces inside Iraq, a clear indication that attempts to control the spread of weapons beyond the borders of Syria and the groups that initially received them has failed in a spectacular fashion…” Moses wrote. Surely, Croatia’s foreign minister Vesna Pusic can do better in dealing with the way Islamic State has targeted a Croatian citizen for its latest display of terror by beheading! ISIS has pointed its murderous finger at Croatia through the kidnapping and beheading of Tomislav Salopek and it is very irresponsible of foreign minister Pusic to suggest that the incident was not originally planned by IS but by some unnamed, non-IS group seeking ransom! Whether ransom was sought before the release of female Islamists from prison it does not matter – both tactics are evidently tied to the IS and it was not by chance that a Croatian citizen was taken!

The kidnapping and reported execution of a foreign national (Croatian Tomislav Salopek) adds a new dimension to an environment of hostility toward outsiders that has taken root in the country. Entrenched military and security political forces have blamed Egypt’s unrest on foreign influences.
“This is already an insular moment for Egypt and it’s quite possible that the country could be seen as not only an inhospitable environment for foreigners, but a dangerous one—and that is [Sinai Province’s] intention,” said Michael Hanna, an Egypt analyst with the Century Foundation in New York.
Croatian foreign minister Vesna Pusic’s evident playing down the role of IS in Tomislav Salopek case could be seen as an attempt to try to help Egypt’s government salvage some of the reputation it lost in this attack for foreign investors and travelers. Such an attempt would be unforgivable for its effect can only incite further IS attacks rather than reduce them. Ina Vukic, Prof. (Zgb); B.A., M.A.Ps. (Syd)