The “Mother of the Nation” (Maadar E Millat), “The Lady of Pakistan”(Khatoon E Pakistan) are given titles to one of the finest Pakistani women who lived in history. Yes, I am speaking of Fatima Jinnah, the younger sister of Muhammad Ali Jinnah, the founder of Pakistan and an active political figure in the movement for independence from the British Rule.

She was a leading, founding and instrumental figure in the Pakistan movement and the primary organizer of the All India Muslim Women Students Federation. Fatima Jinnah like her brother dedicated her whole life to the cause of Pakistan’s birth and its nation building. The Father of Nation Quaid E Azam was always accompanied by Fatima Jinnah, at each public appearance he made before and after partition. It is said that this siblings legacy, in particular of Fatima Jinnah’s unwavering support is the key to his success. When the All India Muslim League was being organized, she was taken on as a member of the Working Committee of the Bombay Provincial Muslim League, and worked in that capacity until 1947.  Paying tribute to her sister, the Quaid once said, “My sister was like a bright ray of light and hope whenever I came back home and met her. Anxieties would have been much greater and my health much worse, but for the restraint imposed by her.”

By profession she was a dental surgeon, biographer and stateswoman. After the untimely demise of Quaid E Azam, Fatima Jinnah despite her personal loss continued struggling for the betterment of the newly born country. She played a significant role in the settlement of Muhajirs in the new state of Pakistan. In those years, she focused on her literary projects, “Brother” is the name of the biography she wrote on the life of Quaid E Azam, but was held from publishing for many untold reasons. By the time it was published, pages from the book’s manuscript had vanished.

“If there was another leader in Pakistan today like Quaid and Fatima Jinnah Pakistan would be a heaven on earth. I had the good fortune to meet Miss Jinnah in February, 1959 when she very kindly attended a N.E.D. College sports function in Karachi. I found her to be a delightful personality with a lovely smile and full of positive encouragements for the young people.  How can one forget those moments when you are congratulated and asked to serve Pakistan well, now that is real leadership.”  A Pakistani engineer A.K accounts.

Late 1960s was an era when dictators and religious zealots had gained power over political scene in Pakistan yet this noble, gracious and courageous lady did not hesitate to take on a military dictator in her later years. She returned to forefront of political life when she ran for the presidency of Pakistan as a candidate for the Combined Opposition Party of Pakistan (COPP). This had her opponent Ayub Khan furious whose dictatorship was in full swing.

He labeled her being pro-Indian and pro-American and accused her of an being an enemy of Pakistan.“They call her the Mother of the Nation,” sniffed Pakistan’s President Mohammed Ayub Khan. “Then she should at least behave like a mother.” What upset Ayub was that Fatima Jinnah looked so good in pants. The more she upbraided Ayub, the louder Pakistanis cheered the frail figure in her shalwar (baggy white silk trousers). By last week, with Pakistan’s first presidential election only a fortnight away, opposition to Ayub had reached a pitch unequaled in his six years of autocratic rule.”

Fatima Jinnah responded by proclaiming him to be a dictator. She started her rallies where it is said nearly 250,000 people turned out to see her in Dhaka, and a million lined the 293 mile route from there to Chittagong. Her train, called the Freedom Special, was 22 hours delayed to arrival because south Asian men hailed by  crowds at each station pulled the emergency cord and begged her to speak impromptu. It is said people waited hours on foot to catch a glimpse of Fatima Jinnah. Her greatest advantages were her legacy as a politically active founding member of the nation and being the Quaid’s sister who had detached herself from the political conflicts that had plagued Pakistan after its Founder’s death. But the sight of this dynamic lady moving in the streets of big cities, rural towns and on train stops of a Muslim majority country was both moving and unique. The crowds hailed her as their leader and called her the rightful heir of Quaid; the chantings of Mother of The Nation were heard far and wide. Her campaign generated tremendous public enthusiasm. She drew enormous crowds in all cities of East and West Pakistan In her rallies Jinnah argued that, by coming to terms with India on the Indus Water dispute, Ayub had surrendered control of the rivers to India. Fatima Jinnah lost the election but it was a narrow win for Ayub Khan attained by vote rigging. More over, it’s believed that had the elections been held via direct ballot, Fatima Jinnah would have won. The Electoral College consisted of only 80,000 Basic Democrats, who were easily manipulated. These have been the findings of historians, investigative media reports and this election did not conform to international standards.

Interestingly Fatima Jinnah defeated Ayub Khan in two of Pakistan’s largest cities, Karachi (Pakistan) and Dhaka (now Bangladesh). During the election campaign, Ayub Khan gathered support of “those Muslim Ulema who were of the view that Islam does not permit a woman to be the head of an Islamic state.” This sort of propaganda against a woman leader of her stature was uncalled for, but very commonly used resort by patriarchal and insecure men throughout history. 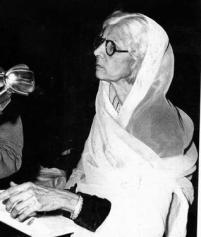 Despite the fact that she lost the election, the importance of this election lay in the fact that a woman was contesting the highest political office of the country. The orthodox religious political parties, including the Jamaat-i-Islami led by Maulana Maududi, which earlier had repeatedly declared that a woman could not hold the highest office of a Muslim country also had modified their stance to support her Presidency candidature.

Through her life’s example and her battles with power hungry men, Fatima Jinnah laid the foundation for the women of Pakistan to aspire and follow into her footsteps.

There are three things common between this iconic lady and myself.

We both have been born in the city of Karachi.

We both aren’t scared to speak our mind.

We both believe sincerely in working for the glory of Pakistan.