Yesterday was our two-hour walk through the city of “The Children of God.” This is the name Gandhi-ji gave the lowest caste of the pyramid in India. They are the lowest of the low.

Today, I want to just introduce you to the city inside the city of Ahmedabad. It is not the only one by far, but is the nearest to Gandhi Ashram. Lots of pictures were taken but not by me, as I was furiously passing out candy to the kids.

So I have to wait for some images to be posted.

In the mean time, here is some information about the Dalits and the slums in India and a national organization consisting of Dalits and published as navsarjan.org.

India’s caste system assigns individuals a certain hierarchical status according to Hindu beliefs. Traditionally, there are four principal castes (divided into many sub-categories) and one category of people who fall outside the caste system—the Dalits.

As members of the lowest rank of Indian society, Dalits face discrimination at almost every level: from access to education and medical facilities to restrictions on where they can live and what jobs they can have. The discrimination against the Dalits is especially significant because of the number of people affected; there are approximately 167 million Dalits in India, constituting over 16 percent of the total population.

Navsarjan is a grassroots Dalit organization dedicated to ensuring human rights for all. Our mission is to eliminate discrimination based on untouchability practices; ensure equality of status and opportunities for all, regardless of caste, class or gender; and to ensure the rule of law..

Navsarjan is the largest Dalit organization in Gujarat, and one of the most effective in India. It is active in more than 3,000 villages, as well as in the cities. A field staff of about 80 men and women—most of whom come from the communities in which they work—keep Navsarjan in tune with the needs of people on the ground.

I was surprised that there were not more videos available for a walk through in a slum in Ahmedabad. The absence of sound or music makes the images more stark.

This Is Incredible India!

Disclaimer: This article is not written by ACE NEWS GROUP. The original source of this article can be found here: 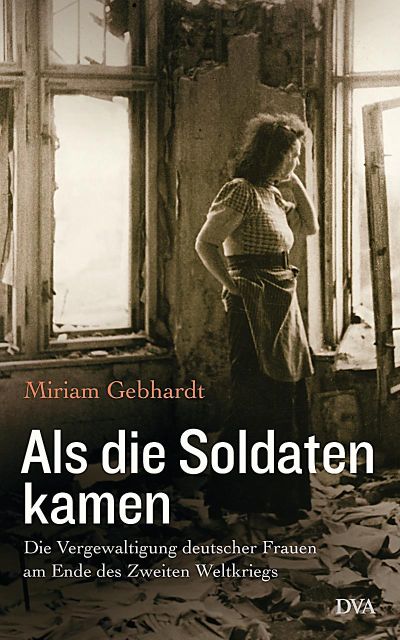 The Western world in particular has since World War II lived a popular imagination or perception that in post-war Germany the Allied forces (British, American and French soldiers) were at best behaviour, well-liked and well-meaning. A well regarded academic and historian in Germany, Miriam Gebhardt, has now published a new book casting profoundly disturbing doubt on the accepted version of the Allies’ role in German post-war history. Indeed, the image we have held about the Allies in post-war Germany now stands in alarming contradiction with the reality revealed in Gebhardt’s book.

On 2 March 2015, the DVA branch of Random House Germany published the book “When the Soldiers Came” (“Als die Soldaten kamen”) by Miriam Gebhardt. It represents a new look at the abusers and the victims of the post-WWII Germany, and Gebhardt says she aims simply to expose the horror of criminal actions of rape in that war and after it.
“The soldiers who defeated the Nazi German forces National Socialist at the end of World War II also brought new suffering to many women. Countless girls and women (and no few men as well) became the victims of sexual violence – all over the country. In contrast to a widely held belief, it was not just ‘the Russians’ who were the offenders, but also American, French and British soldiers.

Using new source material, Miriam Gebhardt has outlined the extent of the violence during the period of occupation at the end of the war – the first historically founded treatment of this topic. She also impressively describes how these women later again became victims – of doctors who arbitrarily agreed to or turned down abortion; of social workers who put pregnant women into homes. And last but not least of a society that right down to the present day would prefer not to talk about the mass crimes, that would rather just forget about the whole business.” 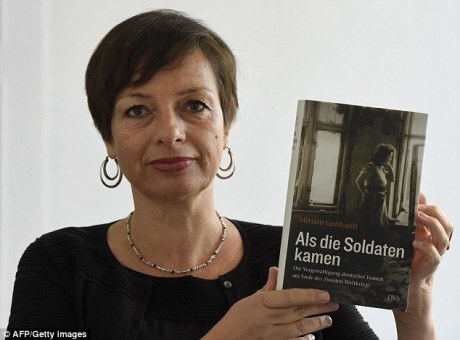 “The assumption that Western Allied soldiers would not do such a thing turned out not to be true,” she said, to the broadcaster Deutsche Welle. “In the method and violence of rape there was no different between American GIs and the Red Army, as far as I can see.”

The book claims Allied troops raped German women during the Second World War by manipulating them with gifts of items they needed such as chocolate, food, coffee, nylon stockings and cigarettes. Gebhardt tracked down some victims and interviewed them about their ordeal at the hands of British, American and French soldiers. Also, “the author bases her claims in large part on reports kept by Bavarian priests in the summer of 1945. The Archbishop of Munich and Freising had asked Catholic clergy to keep records on the allied advance and the Archdiocese published excerpts from its archive a few years ago,” writes Der Spiegel.

“The reports led book author Gebhardt to compare the behaviour of the US army with the violent excesses perpetrated by the Red Army in the eastern half of the country, where brutality, gang rapes and incidents of looting have dominated the public perception of the Soviet occupation. Gebhardt, however, says that the rapes committed in Upper Bavaria show that things weren’t much different in postwar Germany’s south and west.

The historian also believes that similar motives were at work. Just like their Red Army counterparts, the US soldiers, she believes, were horrified by the crimes committed by the Germans, embittered by their pointless and deadly efforts to defend the country to the very end, and furious at the relatively high degree of prosperity in the country.

…Even if it isn’t likely that the Americans committed 190,000 sexual crimes, it remains true that for postwar victims of rape — which was undeniably a mass phenomenon at the end of World War II, there is ‘no culture of memory, no public recognition, much less an apology’ from the perpetrators, Gebhardt notes. And today, 70 years after the end of the war, it unfortunately doesn’t look as though that situation will soon change”.

Gebhardt begins her book with: “At the very least 860,000 women and girls – and also men and young boys – were raped by the occupying Allied soldiers and their helpers. It happened everywhere …” :

Gebhardt said she arrived at that number of sexual assaults by estimating that of the so-called ‘war-children’ born to unmarried German women by the 1950s, five percent were products of rape. She also estimates that for each birth, there were 100 rapes, including of men and boys.

As a matter of interest, while Gebhardt claims 190,000 rapes committed by American GIs the US criminology professor Robert Lilly (“Taken By Force”), who examined rape cases prosecuted by American military courts, arrived at a number of 11,000 serious sexual assaults committed in Germany by November 1945.

Gebhardt’s book paints a much darker picture than what is often seen in cinema and literature of the Allied troops who liberated Germans from the Nazi regime and thus could take time for people to fully absorb, Robert Lilly said.
“It will be resisted to some extent. There are American scholars who will not like it because they may think it will make the war crimes committed by the Germans less bad,” Lilly said.

“I don’t think it will minimize what the Germans did at all. It will add another dimension to what war is like and it will not diminish that the Allies won.” 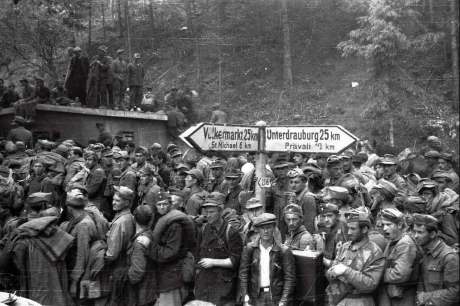 While it has been said that comparatively the least number of rapes of German women (Gebhardt claims that 45,000 women) were perpetrated within the British administered parts of the post-war “German State” (including Austria as it was regarded by Nazi Germany as a constituent part of German state and so, Austria like Germany was divided into similar model of Allied Forces occupation zones) one wonders whether similar motives and mindsets that are believed to have fueled the widespread rapes elsewhere in the German State actually contributed to the genocidal peril when in May 1945 hundreds of thousands of Croats (unarmed soldiers, civilian men, women and children) fleeing Tito’s communist Yugoslavia with the promise of the Allies for protection as refugees were forcefully sent back by the British to the communist Yugoslavia to be murdered en masse either at Bleiburg in May 1945 or thereafter by Tito’s communist operatives. Certainly a motive of retribution does seem to have played a part in the victimising of many innocent people in both cases. This sad thought enters my mind as I begin mournfully to prepare for the 70th anniversary of those heinous massacres of innocent Croatian lives at Bleiburg and elsewhere in the aftermath of WWII. Ina Vukic, Prof. (Zgb); B.A., M.A.Ps. (Syd)